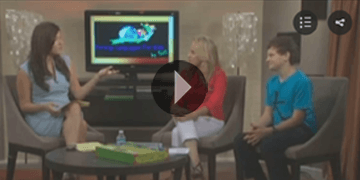 Kit Strauss founded the program with her eldest son, Eli. Kit has a Law Degree from the University of Virginia and a B.A. from Cornell University. After Kit was unable to find quality foreign language programs for her three sons, she started creating her own with Eli. After years of creating language games and activities, and figuring out what worked and what didn’t, they had a vision of how to help other families enjoy and succeed learning foreign language.

“Kids like watching other kids,” says Kit, and “my children and their friends were my guide as to what was fun and humorous and what kids would enjoy as we created the videos and games.”

The result has been a successful, award-winning language learning program called Foreign Languages for Kids by Kids®.

Kit, who founded Foreign Languages for Kids by Kids® in 2011, had provided language education to her three boys from a very early age. As she observed their progress, she noticed that children who started learning a second language at an earlier age found it easier to learn. “I began to see kids who started in preschool or in elementary school, had an openness to learning that older kids did not have,” she says.

Her observations are backed by research. According to the American Council for Teaching Foreign Languages (ACTFL), “beginning the study of languages early is helpful in developing proficiency, and language learning often supports skills used in other courses and enhances overall academic performance. However, the availability of language study in elementary school and middle school is limited for some students.”

This advantage is also acknowledged even by older students. A survey by ACTFL has found that nearly two-thirds of high school students say they wish they could have started learning a language earlier, in elementary school or middle school. The study also found that interest in beginning language study earlier increases as students progress through high school: seniors are almost 20 percent more likely than freshmen to say they wish they had started earlier.

Kit’s approach has had clear results. Foreign Language for Kids by Kids® has been recognized by experts having won more than 15 top education awards in the company’s first two years for its Spanish videos and Spanish board game, including Game and Media of the Year Awards in consecutive years.

More importantly for Kit, her three boys, now ages 13, 15 and 17, are proficient in Spanish and Mandarin, despite challenges each of them faced in speech delay and other learning disabilities. Kit described her oldest son Eli’s early language difficulties, diagnosed as motor planning delays, saying “he could not string words together, not even 2 words. For example, he could say ‘yellow’ and ‘bus’, but he couldn’t say ‘yellow bus’. It was scary….” According to Kit, the turning point came when he began to study a second language. “When he started learning French, something seemed to click for him and his English took off.” Years of language education have paid off: In 2012, Eli won a Chinese language speech competition in Washington, D.C., in which he was the only non-Chinese participant. He was able to study for 6 weeks in China through a State Dept. Scholarship, and recently placed second in the nation in a Chinese Speech Competition for advanced High School Students. Eli has aired in China on Voice of America’s radio program in Asia, explaining why learning Chinese is so interesting and easier than many think, and also appeared on D.C. Talk Live.

Building on what she learned by observing her sons’ education and adding what she knew about their preference for fun activities, Kit has put together a curriculum to teach children Spanish or Mandarin that uses humor as a key component. “It’s all about being comfortable, and having fun. Kids have the benefit of time to learn so it is critical they enjoy learning a second language or they will tune out or quit. Our goal is for children to be excited about knowing a foreign language. Many kids in our Chinese Summer Camps and Spanish classes were really enthusiastic by the end of the programs. Parents and kids were asking us if we would bring our program to their schools and some of the kids were even asking for tutors!”

Kids have a natural interest in information that comes to them in games or by video. Kit’s program is tremendously successful among kids and their parents. “The amount the kids learned in Kit’s summer class was incredible,” said Diane Oliver, a parent of one of the kids in the class. “My daughter has taken Spanish before, in both fun but more superficial classes and harder but more boring classes, but she never liked it or got much out of it. This all changed with the program by Foreign Languages for Kids by Kids®. After the third class, I was hunting down the instructor…”

Foreign Languages for Kids by Kids® program has grown considerably. It had its first public school district adoption last year and is expanding to other public, private and charter schools. It is also quickly becoming one of the very favorite program by homeschool families who feel comfortable and excited with the unique teaching approach and variety of materials.